My Long Suffering Hubby & I had no idea it existed until our friend and my part-time boss, Benjamin Calais, said that we needed to check out what’s happening in the area around Hye, Texas.  So we made a quick trip 226 miles south from Dallas to Johnson City, turned right on 290 West, went 10 miles and wound up in the unincorporated town of Hye.

The only buildings we saw was the package store called Hye Market and the post office. We thought Benjamin was playing a joke on us! But sure enough, a limo pulled up and several people got out and went into the Hye Market. So we decided to follow and were pleasantly surprised to see a buzz of activity going on. There was wine tasting, beer tasting, tequila tasting, bourbon tasting and food tasting. It was fun to see about 20 people “sardined” into this tiny store.

I was kissed and greeted by Jason Cook who is the proprietor, tour guide, and ambassador of Hye Market. He told us that he wants to expand and put in a tasting room separate from the market. From the way things looked, he better get to it quick because I don’t know how many more people would be able to fit around the tasting counters. We were then introduced to Haley, who handles the tastings. While talking to her, she mentioned there was a food truck in Albert (a ghost town) with bacon mayonnaise for dipping your french fries in. We could find it parked at the ice house and dance hall in Albert and we should check it out.

Before we left Hye Market, I tasted a Pinot Grigio from Compass Rose Cellars and a Riesling/Gewürztraminer blend from Hye Meadow Winery. Both wines were good summer drinking wines.

We then headed to Lewis Wines, which is technically in Johnson City.  This winery is so new that they don’t have a sign yet, but the instructions on the website are clear as to how to find them. We drove up a curvy road, past a house (we were told later, people mistake for the tasting room) and found ourselves at the end of the road by a concrete and tin structure with a concrete slab set up with a few tables and chairs. We decided that the door painted red must be the entrance to the tasting room. We were correct, Thank Goodness! and we were greeted by Doug Lewis, one of the winemakers (Duncan McNabb is the other). Both got their start with Pedernales and decided to make a go of it on their own. I must say, this winery is worth watching.

I tried the Viogner (which I’m not a big fan of because it comes off like buttered fruit) but the Lewis Viogner was beautifully balanced apricot and honey notes with a clean finish.

I also tried the 2010 Tempranillo and the “Texas/Spanish” version of a Cotes du Rhone, which is a blend of Mourvedre, Syrah, Grenache, but Tempranillo was added to give it the Texas/Spanish flair. Both wines were extremely good.

However, the one that intrigued me the most was a blend of the Portuguese grapes: Touriga Nacional and Tinto Cao with Tempranillo. This wine was lush with a bit of perfume and dark spices. However, I was amazed at the low alcohol level for such a rich wine (12.7). I think this is my new fave Texas red wine besides Benjamin’s Sangiovese/Zinfandel blend.

The Wines of Lewis Winery

All of the Lewis wines are made from Texas grown grapes and the alcohol levels were relatively low.

If you decide to go to Lewis Wines, make a reservation because the place is small and look for the red door. You will not be disappointed. 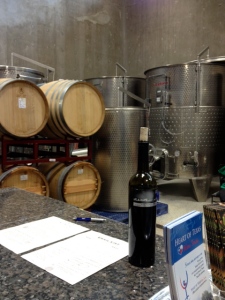 Our next stop was William Chris Vineyards which is easy to find because it is across the road from Hye Market.

The tasting room is partially housed in a century year old house but the winery has gotten so popular that a very modern addition was added with a beautiful view of the Hill Country. 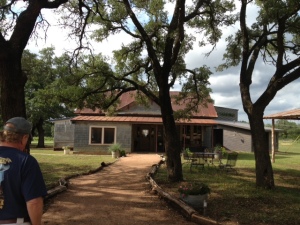 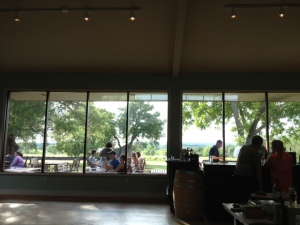 The View Inside William Chris

William Chris is a collaborative effort of winemakers/winegrowers Chris Brundrett and Bill Blackmon. Their first wines came out in 2009 and they use all Texas grown grapes.

I tried several of their wines, but 3 stood out for me.

The first was a Blanc du Bois. Most of the time these wines became overly acidic because they tend to have a grapefruit quality, but the winemakers chose wisely to use the sur lie method in processing the wine. Giving it a smooth, creamy feel while retaining the brightness. A really delightful wine.

The next one was called Emotion. It is a blend of Merlot, Cabernet Sauvignon, Malbec, Syrah and Cabernet Franc. A vanilla smell really jumped out of the glass, but I liked the fact that it was a light easy drinking red.

The last one called Enchante was a blend of Merlot, Cabernet Sauvignon, and Malbec. It was a good red wine, but I think it needs more aging. It came across as a bit green, so I will put this one away and hope it evolves a bit more. 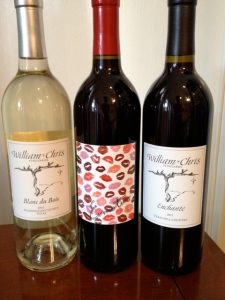 The Wines of William Chris

Next, we decided to take Haley’s advice and head to Albert and check out the food truck, dance hall and ice house. So we took the county road that was on the side of the Hye Post Office and made our way. I swear, I thought this was another joke because all we saw were cows and pasture land. At one point we thought we were trespassing. But luckily we connected with another major road and we looked to the right and there was Albert. 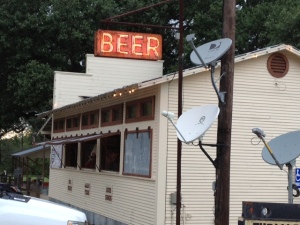 All of the buildings were shaded by huge oak trees. People were gathering at picnic tables or in the ice house and the band was unloading their equipment into the dance hall. The food truck called The Pig Pen was gearing up and I could smell some meaty goodness was going to be heading my way. Sully had a hamburger and I had the pork belly sandwich. We split the french fries with bacon mayo. Awesome! The only disappointment was the wine at the Ice House was either red or white (go figure) and it was crap. I wish I had ordered a beer.

We stayed until close to sunset just to enjoy the fantastic scenery and easy-going pace in Albert and then we had to hit the road and go back to “Big D”.

This was a great adventure and we plan to be back soon.

Who knew that Hye had so much to offer!

One thought on “Hye Texas is the Place to Be”