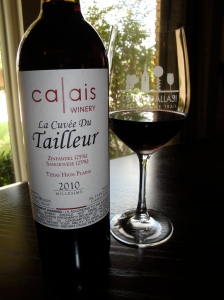 When my friend Benjamin Calais said he was working on a blend of Zinfandel & Sangiovese, I thought that this was going to be an interesting fun wine to drink, but I didn’t think it would be so sublime and food friendly.

Most of the time when I think of Zinfandel, it is the bold, dark fruit with lots of pepper and high alcohol wine that I can only have with food because I feel like my mouth is on fire. But this is different because of the blending with the Sangiovese. Benjamin really knew what he was doing with this wine.

The Sangiovese gives the wine a soft earthiness and a brightness of cherry. It has a wonderful finish and it is relatively low in alcohol 13.4% so it is very drinkable on its own.

I did an experiment with different foods:

Fried black-eyed peas (yes I brought them home from the Texas State Fair). The peas were nutty, earthy and spicy. The dark fruit of the wine tempered the spiciness of the peas, but the peas kept their nutty flavor. It was a fun pairing.

This wine also went well with salmon in a maple peppercorn glaze. Again, the dark fruit tempered the spiciness of the peppercorn, and the bright cherry aspect of the wine helped keep the sweetness of the maple. Because this wine is medium bodied, it did not over power the fish.

Pairing this wine with meat sauce and spaghetti was a no-brainer. All I can say is that I wish I could have had more of both but being bloated and drunk ain’t pretty…

So here’s the snap shot:

This wine was opened for 3 days (I kept it in the door of the fridge & used a rubber stopper) and it was still good to drink.

October is Texas Wine month and I can’t think of a better wine to celebrate with!

By the way, for those who are lucky enough the be in Dallas Nov. 3rd; it is the Dallas Wine Trail. Go to the site to get the low down and hopefully Benjamin will be pouring this wine.